Posted on September 12, 2012 by napsgetbraps

Once upon a time, back in the good ol’ days, celebrities were as untouchable as Rihanna’s vajayjay. No, wait. I meant the opposite of that. I meant no one could touch them, not anyone with a pulse. The rich and famous were like Jesus, except fun to party with and well dressed. They did no wrong, said nothing a PR rep couldn’t spin by the time the paper hit your driveway, and always looked good, no matter how drunk or coked out they were. Sure, every once in a while the paparazzi would snap some unflattering pictures of cellulite, a face without makeup, or maybe a mug shot would get leaked, but that was the absolute worst case scenario. Even then, it would take an eternity before those photos were published; sometimes up to, like, 24 hours when the paper came out the next day (how did we survive those dark ages?).

Well, those days are LONG gone. If Brittany flashed us her coochie getting into or out of or under a limo these days that shit would be across the world so fast my grandmother in Italy, who has never used a computer in her life, would somehow catch a glimpse of it while picking tomatoes in her garden in the mountains. Fuh’ real.

I went to NYC this summer and was completely shocked at how it barely felt like I had left Toronto. Beyond the 203029301823097 additional people and things to do, I mean. Years ago you could go to New York and see styles you hadn’t seen before, hear music you hadn’t heard before, and be cussed at in ways you never knew existed. The Internet has changed all of that. Globalization is no joke. New Yorkers were dressed exactly like the people I had left behind on my block. The same songs I was sick of hearing in Toronto were giving me migraines in NYC. Same chain stores. Same styles. Same same same. Everything is the same. But, I digress.

According to well-known facts (deduced entirely by me from my personal life), chat rooms, MSN, and ICQ were the first online services that introduced strangers to one another. [Entertaining] conversation was really the only driving force behind these things – no one was talking to you based on your propensity for duck face and cleave shots. If you were a punk kid like me, trolling before the term existed, you would do things like go into chat rooms named “Smashing Pumpkins is the Greatest Band To Ever Exist” and straight shit talk Smashing Pumpkins until you got kicked out (true story). What can I say, I was a bully from the minute I could form a sentence.  Hi5, MySpace and Friendster made it more of a networking [creeping] thing and cleared the way for Facebook to take over the world. With actual profiles, pictures and connections to other people, it was like going to a house party and meeting new people you were somehow connected to through people you already knew. The only difference was that now you could stalk them in the privacy of your own home, and not have to force someone to introduce you over loud music and punch. In theory and functionality Facebook wasn’t much different than MySpace, but it took off and basically never slowed down. The very early adopters may have fallen off, but the fact that my mother has a Facebook profile says something. I think my Facebook usage actually increases every year, and I’m really cool so imagine the general population. (You can read about how much I love Facebook here.)

While Facebook changed the online stalker game, Twitter came along and really shook things up. Facebook was all about stalking keeping in touch with people you already knew, people you just met, or people who dated your ex. There were celebrity profiles but nobody believed they were real. If only we knew then that the only thing between us and a real celebrity profile looked like this: 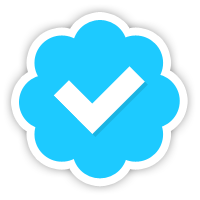 As George Cosantza once said, “Anybody knows, you gotta keep your worlds apart!”

Celebrities were now, metaphorically speaking, within earshot. You could just use a little @ symbol and potentially tell someone you’ve had a crush on since you were 5 years old (coughAndrewMcCarthycough) how you felt about them, AND THEY COULD READ IT. The same people that usually only spoke to media, during allotted and predetermined times, now started sharing their every thought with the entire world. Every day. Or hour. Or in some unfortunate cases, every few minutes.

Thanks for the update.

Now, this could have gone one of two ways. In a perfect world, we would have gotten to know sides of these celebrities that were seldom seen. Maybe it would become a way for them to talk about the charities they volunteer at on weekends. Maybe they would share a lot of deep, well-thought out opinions and beliefs that they didn’t get to share before Twitter because they had no tool to do so. Maybe they would spend all sorts of time on Twitter trying to get to know their fans and doing things for them (Ryan Leslie used to use Twitter for this reason A LOT in the past, telling his fans to meet him places to give them iPods or to be part of his videos). Any of those options would have been awesome, and would have supported the notion that we are lucky to have these talented, beautiful stars in our lives, letting us live vicariously through them to rid us of the boredom and normalcy of our own existence. Unfortunately, Twitter showed us the other option. Twitter made us see the reality we never wanted to see. It looks something like this:

Ever since Twitter, celebrities have been seen for what they actually are: turds wrapped in ribbons. At first I barely used Twitter to ‘tweet,’ I just followed every rapper, comedian, singer and actor I liked to see what they would say, find out tour dates, get links to videos and songs and whatever else I thought would interest me. Little did I know that I would soon see the real side of these morons. I remember how appalled I was when I saw how poorly Noreaga and Styles P grasped the English language. I remember the first time I watched Saigon and some video hoe go at it about who was really dissing who and who asked for whose number and shit that was so infantile it wasn’t even entertaining. I remember the first time I started reading Joe Budden’s tweets about Tahiry and watching them fight on Youtube. I mean, at first, it was like watching a soap opera. It was so bad but so, so good. It was like when you hear couples fighting in public and you turn down your iPod to eavesdrop, knowing it could easily be you but it’s not, so it’s hilarious. After a while, I was like – wait, why am I watching their dysfunctional relationship online when I could just pay attention to my own dysfunctional relationships? One big reason that we listen to music and watch movies sometimes is to ESCAPE REALITY. When the people who are supposed to save me from my own mundane life by letting me get a glimpse of the champagne life have nothing better to show me than what I can get in the mirror, they lose their appeal. The entire entertainment industry is BUILT on that appeal. Perception is everything. I don’t care that you rent your cars, clothes and jewellery for the red carpet. It’s all an illusion, man. We know. That’s what we’re buying into!

As most of you may know, I was once in love with Joe Budden. After a few years of following him on Twitter and my recent introduction to his Instagram, I really, really started losing my boner. There were only so many emo statuses and pictures of him kissing his fling-of-the-month that I could handle. YOU ARE A GROWN ASS MAN. A RAPPER. YOU HAVE TATS COMING OUT OF YOUR ASS. WHY DO YOU ACT LIKE A 13 YEAR OLD EMO BITCH? Seeing this stuff not only makes me not want to be a groupie waiting for you backstage, it makes me NEVER want to listen to your music again. That was it. My long love affair with Joe Budden ended one afternoon when I just couldn’t look at him anymore without becoming a lesbian. This man is supposed to be in the studio, making hip hop music people are supposed to care about, instead he’s crying about something I posted on Twitter?!?! Who cares what I think!? Even I don’t!

The Twitter exchange that Joe Budden and I had proved one thing for me:

(*Note: Joe Budden is such a walking vagina that he later deleted these tweets. I think he was on his period.) 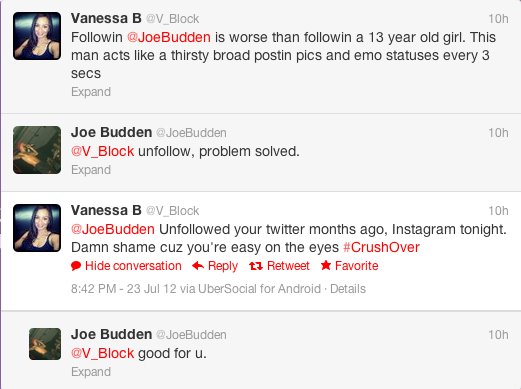 EXTRA EXTRA! Joe Budden gets his period for the third time this week!

I love naps. And providing the world with my social commentary when I'm awake.
View all posts by napsgetbraps →
This entry was posted in Uncategorized, V's World and tagged drama, gossip, hashtag, joe budden. celebrity crush, twitter, verified twitter account. Bookmark the permalink.